An In-Depth Guide to LGBT+ Symbols and Pride Flags

The LGBT+ community fights a seemingly never-ending battle against all kinds of hatred and ignorance. Thankfully, they are not fighting alone. Members of the community may find their greatest power in solidarity. When they join forces, they can best all challengers, protect the innocent, and achieve victories that would be impossible on their own.

Flags and symbols are major elements of this struggle. They can unite diverse peoples and give them and their allies a clear, visual means to present that unity. Moreover, they can demonstrate to the world that they are here, queer, and proud — and never going back into society’s closet.

Here is Rainbow Depot’s own guide to the LGBT+ symbols and pride flags that continue to give people a way to express their identities. 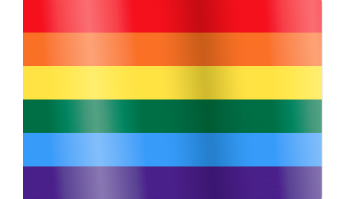 The most well-known and widely used LGBT+ banner is the rainbow flag. An artist named Gilbert Baker created the design in 1978 for the San Francisco Gay and Lesbian Freedom Parade. Since then, the flag and its six stripes — red, orange, yellow, green, blue, and purple — are associated with gay pride throughout the world.

We have learned so much about sexuality and queerness in the decades since the rainbow flag’s creation. However, it is not outdated by any means and may actually be more resonant now. That rainbow symbol is all about inclusivity, and it can encompass all the LGBT+ identities we know today and any we may identify tomorrow.

People who identify as bisexual do not just face prejudice from homophobes. They also experience prejudice from certain folks who identify as gay or lesbian and do not believe that anyone can truly be sexually attracted to more than one sex. To increase the visibility and assert the legitimacy of their identity, the bisexual community has their own flag, designed by Michael Page in 1998.

The top stripe is magenta, for same-sex attraction, while the bottom is blue, for opposite-sex attraction. Between them lies a thinner lavender stripe that stands for holding multiple types of sexual attraction. This flag may cover every identity under the bisexuality umbrella, though some of these identities have flags of their own.

People who identify as asexual may also experience prejudice, even from others within the LGBT+ community. Their lack of or disinterest in sexual attraction is as valid as any other identity under the acronym, and they show solidarity with their own banner. The simple design consists of four stripes: black for asexuality, grey for “grey-A” (the grey area between full-on asexuality and full-on sexuality), white for sexuality, and purple for community.

In 2010, the Asexual Visibility and Education Network led a campaign on multiple asexuality-focused websites to give the community its own flag. These websites’ users created designs for a potential flag, then voted on them in a multi-stage process. The one that won is increasingly in use by asexuals the world over. This goes to show how much online communities have done to increase awareness of LGBT+ identities, especially those within the plus sign. 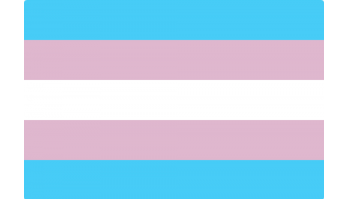 Multiple flags are used around the world to represent the community of transgender people. The most famous one is the transgender pride flag that trans activist Monica Helms designed in 1999. The top and bottom bars are baby blue, while the second and fourth bars are a light pink — the traditional colors for boys and girls, respectively. The white bar in the middle signifies gender identities other than “man” and “woman.” Helms specified that it stands “for those who are transitioning or consider themselves having a neutral or undefined gender.”

Uniquely among LGBT+ flags consisting solely of horizontal stripes, this one is symmetrical along the x-axis as well as the y-axis. Helms did this on purpose, saying, “The pattern is such that no matter which way you fly it, it is always correct, signifying us finding correctness in our lives.”

The inverted pink triangle’s origin is rooted in struggle: the Nazis invented it to distinguish homosexual prisoners from others in the concentration camps. Even after the liberation of the camps, too many of these detainees continued to suffer in confinement. Allied militaries, recognizing what the patch on their shirts indicated, shared some of the same prejudices as their Axis foes.

In the intervening decades, many members of the LGBT+ community chose to wear the symbol on their own accord. Those who do view the act as a means of taking back the symbol, or perhaps making it their own. The AIDS Coalition to Unleash Power (ACT-UP) adopted it for their logo to represent their battle against homophobia.

The astrological signs of Venus and Mars have long been used to represent, respectively, the female and male genders. It is only natural that they have since been appropriated to represent female-female and male-male attraction. A pair of interlocked Venus signs is a common symbol for the former, while the latter has similarly been symbolized by a pair of interlocked Mars signs.

The aforementioned signs are also ripe for reinvention in the context of transgender identity. The most common example is a combination of them, in more than one way. A line with a notch juts from the bottom of the circle, as with the Venus sign. An arrow shoots out of the top right, like in the Mars sign. On the top left is a mix of both: an arrow with a notch.

Other versions of this sign exist as well. In one of them, the line with the arrowhead and the notch creates a diameter within the circle. It represents nonbinary identities — a “no” sign applied to the concept of the gender binary, or gender itself. Then there is the astrological sign for Mercury, with a notched line at the bottom and a half-circle crowning the full circle. It is used to represent those with hermaphrodite properties.

These are only some of the many, many LGBT+ symbols and flags used throughout the community. Sporting these icons on your person are a way to express pride in your own identity and solidarity with others. You can find a massive assortment of items with all these and other symbols and flags right here at Rainbow Depot. Our selection reaches much further than the flag that serves as our namesake. It has to be, because we are all in this together.